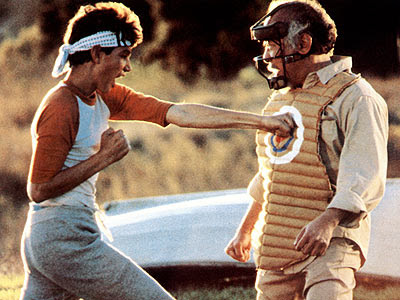 My wife took it upon herself to rectify this gap in my cinematic education -- and since my family didn't get a VCR until well in the 1990s, she has her work cut out to catch me up on some of the hits of the 1980s in particular. Nearly 30 years on, there's not a whole lot of point in taking on a cultural phenomenon -- I finally know where some of those lines come from! -- but not much interest on my part either: despite much silliness, and a ridiculously cheesy ending, I thoroughly enjoyed the screening. It's hard to imagine the people behind the Karate Kid equivalents of 2012 adopting such a relaxed approach to the central narrative, or providing so few actual fight sequences -- high school romance is at least as important here, and there are a couple of sweet sequences between Ralph Macchio and Elizabeth Shue before we finally get to the main event. Admittedly, I'm not about to test this theory by watching a slew of recent films directed at the teen audience.

Although the film is hardly an ad for subtle analysis of Asian-American history, it's still somewhat notable that the villain of the piece is the Vietnam-vet soldier with the kill-kill-kill attitude, in contrast to the quietly heroic Japanese-American, played by Pat Morita, who does what he can to deliver his various aphorisms with as much good sense as possible. If you ever wanted to teach a class on how Hollywood films ignore boring old reality, this wouldn't be a bad place to start -- no-one ever bothers to explain the almost complete disappearance of Ralph Macchio's mother from the film for a good hour, nor how Macchio is apparently released from school obligations to train all day at his personal dojo (the film takes place over the course of the fall semester).