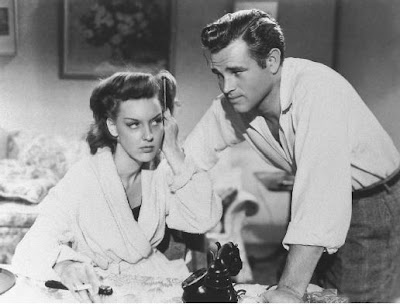 One of those films I'd meant to see for years, but it wasn't until I heard Martin Scorsese mention it again in his introduction to Lawrence of Arabia that I was prodded into action. It seemed the most unlikely connection given the scale on which the two films are conceived, with Detour clocking in at just over an hour and made on the tightest of Poverty Row budgets. Scorsese's point, as I recollect it, was that both films show men apparently caught in the grip of a pre-ordained fate, which hangs over them throughout their lives. That's hardly an idea that's to Lawrence's credit when you see Detour, although I think that Lawrence's conception of his fate can be taken to a much greater degree at face value, whereas Tom Neal, playing the sad-sack protagonist here, is all about self-justification as his life spirals out of his control (surely an influence on Scorses's own Taxi Driver, with its own insistent voice-over narration). Though there's the occasional whip of terrific dialogue, particularly from the mouth of Ann Savage, this is noir in its truest distillation, a tale that focuses on the dregs rather than the finely-turned line; the dénouement is shockingly brutal, perhaps accidental but entirely in keeping with the pitilessness of a truly self-centered man.