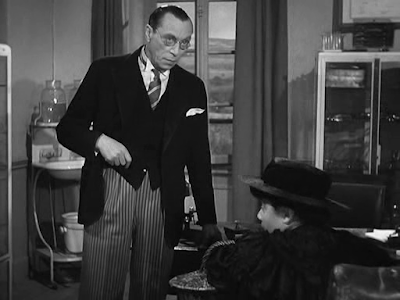 Louis Jouvet's penultimate film is a return to the source as Dr. Knock, a new doctor arriving to take over a practice in an apparently misbegotten corner of France -- a part that Jouvet originated on the stage in 1923, and which he played in a prior film incarnation in 1933. Sadly, that earlier screen version seems to have all but disappeared, with the exception of a couple of scratchy clips online featuring both Jouvet and Robert Le Vigan, although those extracts give some brief insight into the ways in which the actor re-worked the character and his own screen technique over the decades.

After so many years of mostly minor parts, Jouvet was front and centre most of the time in his postwar work, and rarely more so than here. That's not to say that he blows everyone off the screen, nor that he's even present in every scene, but rather that his character is so distinctive in his manias that he's very much on the viewer's mind even when he's offscreen; whether he is present or not, all of the other characters are reacting to him. By contrast, Jouvet the performer is very generous with his fellow actors, including familiar faces like Pierre Renoir and a young Jean Carmet, who was already well on the way to honing what would become his familiar comic persona. The strength of the support is central to the tic-tac of both dialogue and physical interaction -- for instance in the delightful bit between Jouvet and Renoir, playing the local pharmacist, where the two men hurriedly agree that they are entirely above base monetary motivations. Equally amusing, in a slapstick register, are the reactions of André Dalibert as Jouvet manipulates him in ways that would befit a fairly vigorous veterinarian. Much briefer, and of more historical note than anything else, is the one-line appearance of Louis de Funès, some years before stardom hit. 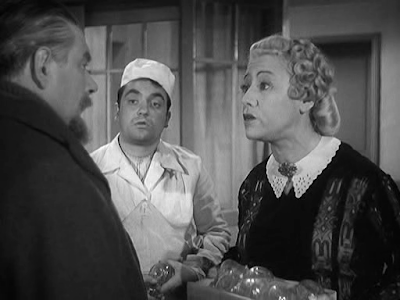 Guy Lefranc handles things nicely for his first turn at the helm (he had worked as an assistant on films by a rather distinguished array of directors -- Jean Grémillon, Raymond Bernard, Robert Bresson). There's a clever scene centering on one of the doctor's early diagnoses, for instance, where we get a point of view shot that circles the patient as the latter looks upward in search of reassurance from Knock. Elsewhere, the framing of the actors ensures that the focus remains on their performances, already well served by some very fine dialogue. That's key in the scenes when we see Jouvet's eyes wander away to the middle distance during a consultation, a clue to his state of mind that we're aware of even if his patients can't see the problem; cuts from one face to another would have made this rather less obvious. It's also a film of considerable zip -- not only do several months pass by in the blink of an eye, but the rhythm of the key scenes is imbued with a sense of momentum that underlines Knock's rapid takeover of local life.