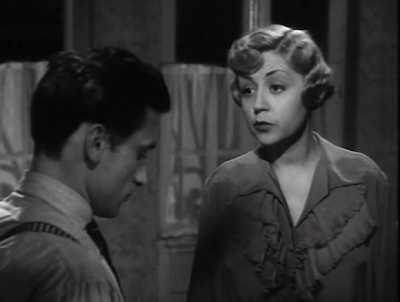 A pleasant surprise, for somehow I was dreading this entry on the path to Louis Jouvet completeness; the idea of a comedy set in the world of the 1920s music halls had no particular appeal, despite the presence of the wonderful dialogist Henri Jeanson behind the camera for the one and only time in his career. My misgivings seemed to be confirmed when Louis Jouvet first appeared, for he seemed to be in high theatrical mode, with a silly beard to underline the point (the kind of thing he could do in his sleep, I thought).

How wrong I was. The film is absolutely charming, and Jeanson's dialogue often sparkles -- Jouvet and Suzy Delair, reunited for a third and final film after Copie conforme and Quai des Orfèvres, both make hay with their lines, and while Delair is sometimes an uneven actress she manages her character's transitions rather well here, pivoting from concerned sister to music hall star in convincing fashion, and clearly enjoying the spotlight (as befits her character). The scenes with Delair on stage aren't really to my taste, but the sequences are probably representative enough of the music hall setting -- although the film is set decades in the past, the filmmakers seem to have had no trouble rounding up the various acrobats and trick cyclists required for background colour. The action, which is occasionally rather serpentine, zips right along -- Jeanson crams a terrific amount of background detail in to the film, evoking names and incidents of the music halls of yore, with a healthy dose of affection (it's a bit like the filmed equivalent of Charles Trenet's song Moi, j'aime le music hall in that regard). He's also generous in granting fine lines to the gallery of supporting players -- Monique Mélinand, Jouvet's companion, has a delicious sequence wherein she declaims that she only sleeps with men to either get rid of them or to become friends with them, since she can't stand them as bosses. Jouvet, of course, enters the room the moment she utters her line; as he begins his own speech, it's hard to avoid the impression that a grinning Mélinand is laughing at Jouvet (rather than at his character).