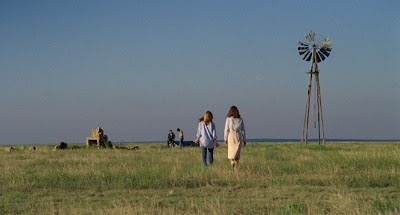 1973, US, directed by Terrence Malick

Not for the first time, I'm struck by the way in which the felicities of timing can affect how I see a film -- whether it brings other, recent viewings to mind, or whether it triggers more distant memories. I suppose you could argue that if I'm making such mental connections, I'm not really absorbed in the film at hand, but that's just the way my mind works, particularly if it's a repeat viewing. Others have made the connection between Badlands and Wes Anderson's Moonrise Kingdom, which seems especially obvious in the middle section where Malick's protagonists, played by Martin Sheen and Sissy Spacek, create a rural idyll for themselves, though my thoughts turned most insistently to a pair of Australian films, Wake in Fright and Walkabout.

All three films share an outback setting, but also a kind of dreamlike quality -- anchored in Badlands by the off-kilter mental states of the main players. Sheen and Spacek are both extraordinary, finding an almost hypnotic state of ennui in their performances, with Spacek's voiceover providing further illustration of her character's dissociation from the events we see onscreen. There's a particularly black streak of comedy to be found in some of her observations; Malick mines some of the same territory in Days of Heaven using another very unusual performer, Linda Manz, though the narrative stakes are different in that film.