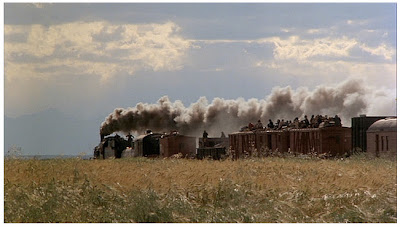 1978, US, directed by Terrence Malick

Surely one of the most visually beguiling films ever made, with the stunning Alberta (playing north Texas) landscapes complemented -- even surpassed -- by Richard Gere, Brooke Adams and Sam Shepard in their respective primes. It's hard to know whether Nestor Almendros's camera (or is that Haskell Wexler's camera?) is more in love with the setting or the players, observing fields of wheat swaying gently in the breeze or the detail of a hair falling across Adams's face with equal intensity. And Richard Gere just looks so young - twenty-seven when filming began, though he seems even more youthful, despite his character's tough years.

"Story" is not Malick's overriding interest; the action is in many ways rather slight, with the director far more focused on atmosphere, chronicling first the oppressive heat and noise of an iron production plant before opening up the wide vistas of the agricultural heartland, with its own entirely different, though perhaps equally implacable, set of rhythms, driven by weather and ripening crops. Malick captures the sudden bursts of energy inherent in the agricultural cycle with acute care, the landscape suddenly crawling with humans driving everything else before them, before the season ends and the crowds hitch rides to the next crop and the next paycheck. He's equally skilled, though, at delineating the quiet interactions between his characters, the charged moments that join the adults together.

The unfolding story is observed by young Linda (Linda Manz), whose laconic voiceover provides its own counter-narrative; this odd young woman's inner voice often seems disconnected from the events unfolding before her. The film derives most of its humour from her eccentric commentary, though by the end there's great pathos to be found in the disconnect between Linda's version of the world and what we see onscreen.

I hadn't seen Days of Heaven since an arresting small-screen viewing years ago, so the screening of a beautiful print at the Brattle theatre felt almost like I was seeing the film for the first time. However, somewhere along the line my mind had confused the ethereal Saint-Saëns music used in this film with a more percussive Carl Orff piece employed in Malick's previous Badlands. As Days of Heaven was unspooling I kept getting distracted by the thought that Malick was going to have a hell of a time managing the shift in tone to accommodate the Orff music until the penny finally dropped.