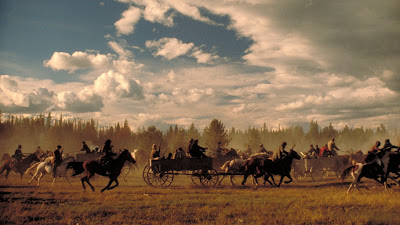 I'd never read Steven Bach's chronicle of the making of Heaven's Gate (or at least the parts he could recount, since his fellow executive David Field and director Michael Cimino withheld their cooperation), and revisited the film before cracking the spine. Even as a film, never mind as a financial endeavour, the picture has its problems, at least if you approach it hoping for some of the conventional pleasures of Hollywood -- a clear storyline, reasonably well-developed characters, and so forth.

Although I'm by no means averse to cinema that takes its time making a point, or even taking time to be the point itself, the mix of epic, technically impeccable staging and almost interminable point-making here seems awkward at best. While the prologue is designed to give the film a greater resonance, rather than condemning it to the then-unfashionable Western genre, I found it so unengaging that I almost gave up before the film proper had begun; John Hurt, a favorite performer, can't do a whole lot with a character who has virtually no development, and his opening scenes seem especially thankless in that respect.

And yet, the film casts a strange kind of spell -- partly, I think, because there's something genuinely beguiling about the idea of Hollywood committing serious money to an artistic take on class warfare in the nineteenth century west (even if it's junk as history). And partly, too, because on an individual scene level much of the film is quite masterful -- the choreography of players and cameras is remarkable, whether in the relative intimacy of a barroom, the public arena of the roller rink (unlike other segments, they're not a second too long), or the astonishing, brutal finale on the battlefield.