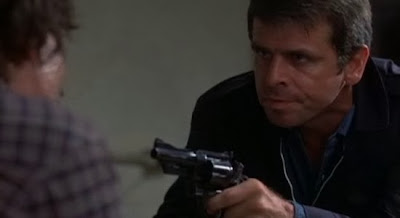 The core idea here is to see just what happens when you push someone to the edge, and then right over -- classic exploitation stuff, but handled with considerable skill, and, until the finale, a surprising degree of tact in terms of how to show, or not show, scenes of violence. Indeed, much of the tension comes from the idea that we're not quite sure which direction things could go. Politically, the film remains a little muddled -- it's clearly critical of the ways that veterans of Vietnam are treated, and is somewhat ahead of its time in the focus on PTSD, but it never really delves into the fact that virtually all of the "bad" folk are non-white, across the border or overseas, even if a token Anglo creates further confusion. William Devane and, in a smaller role, Tommy Lee Jones are both very strong, depicting men desperately trying to hold it together in a world that has moved on and papered over the experiences that have become central to their lives.