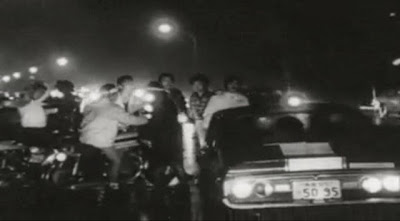 1978, US, directed by Mitsuo Yanamigachi

Surely one of the key films in any discussion of the documentarist's bond of trust with his or her subjects, for Yanamigachi appears to have been fully accepted into the Japanese biker gangs that he depicts for us, whether they are shown engaging in strikingly extended internal debates or engaging in (generally fairly mild) disobedience. As with another unusual Japanese documentary, The Emperor's Naked Army Marches On, that position of trust creates some dilemmas: at times, the gang leaders hit more junior members, or otherwise attempt to control them, and while it's not quite at the level of the physical assaults in the later film, you do wonder whether the filmmaker had thoughts about when to intervene and when to keep filming. As a depiction of group dynamics, it's absolutely fascinating, with extended debates on the gang's self-regulation, while the cultural differences highlighted by the almost collegial relationship with the police give the film great anthropological interest for the non-Japanese viewer (and again recall The Emperor's Naked Army Marches On, where the protagonist calls the police on himself, and treats the officers with the utmost respect).