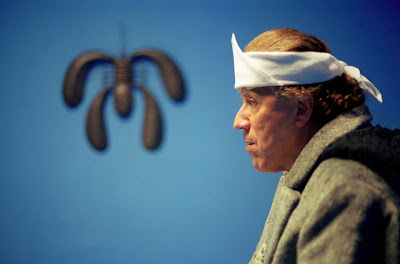 I'm starting to sense a theme in Paolo Sorrentino's films -- the first three films I've seen are all portraits of isolated or solitary men, twisted by circumstance and unable to pursue conventional lives and friendships. Women are certainly present in these tales, but almost always on the periphery: even where, as here, they take an active role in shaping the action, it's mostly as seen from the male perspective, with Sorrentino taking a greater interest in the consequences for his central characters (The Consequences of Love...). As stylishly constructed as Sorrentino's other films, L'Amico di famiglia is also somewhat more insistently oddball, from the opening shot (though that is, eventually, explained in fairly logical terms). That may reflect the worldview of the titular friend, Geremia De Geremei, played by Giacomo Rizzo -- a sort of Italian Ron Perlman -- in a performance that's devoid of vanity; Geremia, a moneylender, an unattractive man, both mentally and physically, and Rizzo never looks for the audience's sympathy, with every minor shot at redemption quickly turned around by a man constitutionally unable to avoid the temptation to take
his pound of flesh.