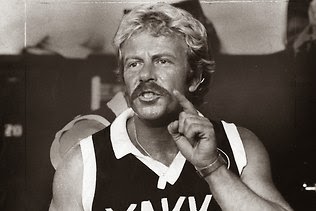 Not unlike their previous collaboration, Don's Party, there's something awkwardly stagey about Bruce Beresford/David Williamson's screen version of the latter's play about the (mostly) behind-the-scenes shenanigans at an Australian football club. The juxtaposition of the very realist setting in the grounds of an actual club and scenes only very lightly amended for the screen is a little disconcerting -- at times, you have the sense that the "exit stage right" directions remain in the film script, while there's a broadness to the caricatures that also seems at odds with the setting. Graham Kennedy's character is especially buffoonish, and only Jack Thompson succeeds in generally surpassing the fairly narrow dimensions of his character, giving the sense of a man who can adapt and evolve. As a social document, it's quite fascinating, though, dramatizing a quite specific period in the history of Australian football just as professionalism was beginning to change the game.