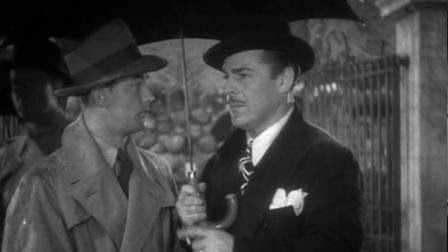 A convoluted noir that frequently gets bogged down by excessive talkiness -- the rhythm is off, with neither the zip of the gangster movies of the 1930s nor the zing of the best noir dialogue (a zip that could often prompt the viewer to overlook the plot holes). One extended sequence, in which Alan Ladd tries to manipulate a thug played by William Bendix, is symptomatic: aside from the set-up being frankly incredible, there's no good reason for the scene to unspool at such length, and neither Ladd or Bendix does much of interest with their lines. Admittedly, Ladd isn't really my cup of tea to start with; his boss, played by Brian Donlevy, is much more fun to watch.

The Glass Key was another of the films banned by the Gold Coast censor in 1947, this time primarily because of the possible implication that "crime on a large scale pays handsomely and is in itself to be admired." There's certainly an element of truth to that, even if the film takes care to ensure that those responsible for the worst onscreen crimes are indeed brought to book; the attempts to ally political and backstreet muscle do escape prosecution, though since there was no democratic process in Gold Coast at the time, it's not clear whether this would have been a major source of concern for the censors. The sultry presence of Veronica Lake may have worried them rather more.