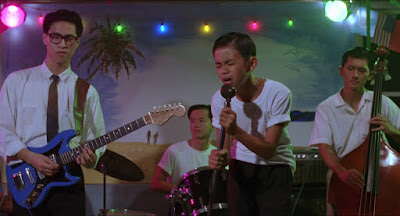 An extraordinarily ambitious film that aims to paint a picture of an entire generation of (urban) Taiwanese still adjusting to live after migration from the Chinese mainland, drawing liberally from Edward Yang's own youth in Taiwan -- the Chinese title for the film makes reference to a tragedy that is woven into the latter stages of the film, and which transfixed Yang and his peers at the time. A degree of historical knowledge, such as that provided by the booklet accompanying the Criterion edition of the film, greatly helps with understanding of Yang's goals, in particular the unusual, loose-limbed first hour or so during which the film gradually coalesces around one protagonist while nonetheless retaining a sense of the broader fresco.* Indeed, the film is novelistic in the best sense, weaving a variety of destinies together to exceptional effect.

The English language title emphasizes the fascination that overseas, and particularly American, culture held for young Taiwanese of the 1950s and 1960s, just as postwar Germans delved into the depths of American popular culture, as in the films of Wim Wenders (like Wenders, Yang suggests a deep degree of alienation in the postward populace, an absence of emotional engagement that underpins the film's bursts of violence). Yang is looking back at his own youth, but there's little trace of nostalgia -- even when the film is lit with a wonderful warmth, there's often a sharp contrast with the events or words onscreen, while Yang makes exceptional use of naturalistic lighting effects during one of the film's most bewildering and brutal sequences.