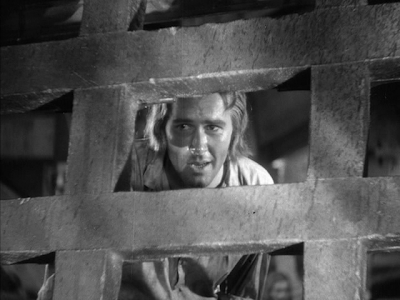 You get the sense that Errol Flynn knew exactly what kind of opportunity had landed in his lap when he was cast as Captain Blood: he blazes across the screen, investing every line with a kind of larrikin enthusiasm, moving from high drama to comedy to swordplay with consummate ease, a gleam in his eye in almost every shot. The only downside is that the film flags somewhat when he's not onscreen, despite gripping battle sequences and a rollicking, partially fact-based plot. 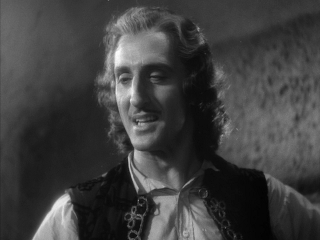 Michael Curtiz shows his stripes in the early going, in the carefully-staged court sequences - great shadows loom over the spare set as the accused sweat in the makeshift dock - and on board the ship that takes Flynn and his fellow convicts to the Caribbean, the light from the water outside dappling Flynn's face. However, the grim tone of the first twenty minutes or so fades pretty quickly against the boisterous action, and even unpleasant events - such as Blood's all-too-abbreviated encounter with the dastardly Levasseur, played by the Basil Rathbone in love-to-hate-him mode - are quickly put aside by the demands of the plot.

This film is part of my Watching Movies in Africa project and I couldn't help wondering how African audiences must have reacted to the film's depiction of slavery. While the precipitating events at the beginning of the film are accurate enough, and resulted in the transportation of hundreds of white Englishmen to the West Indies, the film almost never shows any black slaves although they would have been in the overwhelmingly majority on the plantations; indeed, the black extras mostly serve as domestic servants rather than as field-slaves, although they are never individualized in the film. Captain Blood played at the Picturedrome theatre in Kumasi (Ghana) in January 1951, advertised with the slogan "Robin Hood in Captain Blood".

If ever there were a screen debut in a major role in which you see a star born, this film is one of those. Flynn was clearly very much at ease before the camera and had a role to shine in.