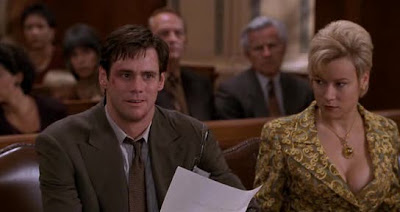 Made at the height of Jim Carrey's 1990s arc to the A-list, Liar Liar is solid evidence of the pitfalls of churning out seven movies in four years. There's a terrible sense of diminishing returns as Carrey mugs for all his worth, but he's incapable of escaping the terribly sticky plotline. There's something unsettling about the way in which Carrey's character gets to behave like a nine-year-old even on his good days and still emerge triumphant - and what's with using the word "Creep" as a term of endearment for your child? Carrey's gift for physical comedy still enlivens the set pieces, and the film is at least snappily edited.