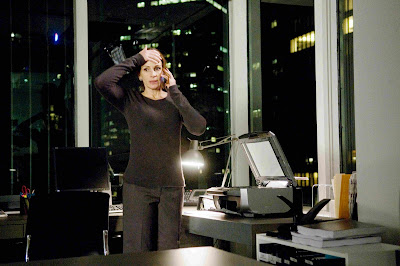 2009, US, directed by Tony Gilroy
Despite the thoroughly of-the-moment narrative strategies, Duplicity seems to have been carved from old-fashioned Hollywood stone: two eye-catching stars, the kind of satisfyingly convoluted double-crosses Chandler might have enjoyed, and a script bristling with verbal darts. The structure is occasionally a little exhausting, dispensing information in fits and starts, and playing games with the viewer that would have earned a reprimand from S.S. Van Dine, but Gilroy makes excellent use of Julia Roberts and Clive Owen - there's a real sense that the two actors enjoyed working together - and he's as assured on caper-ish territory as he was on the chillier ground of his previous Michael Clayton. There's not much substance here to the portrait of corporate shenanigans, in contrast to the previous film, despite the enjoyable irony in the idea that corporations have acquired all the security paranoia of Cold War rivals; Gilroy deflates much of the film's satirical bite when we discover the enigma at the heart of the plot.