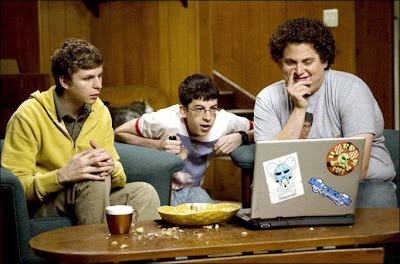 
Superbad hews close to the Judd Apatow TM formula, combining crude verbal invention with what's ultimately a rather sweet centre. Greg Mottola, who helmed half a dozen episodes of Apatow's television series Undeclared, is the director for hire on this occasion, and while he reinforces the sense that he's a very fine director of actors, he could probably afford to be a little less respectful of the script by Seth Rogen and Evan Goldberg.

The film is rather slow going at first, getting bogged down in lengthy verbal set pieces before setting up a familiar high school party scenario. Jonah Hill, in particular, is called on to deliver a series of turn-the-air-blue rants that might usefully have been edited a little more tightly, not least because the repetition renders the character as something of a one-trick-pony. Once the plot is set properly in motion, with the main characters embarking on a liquor-buying expedition, the film heats up. It's a surprisingly self-aware enterprise at times, with the characters themselves reliving especially hilarious moments either with the aid of CCTV tapes or through their own retelling of the story before it has even come to a conclusion.

Mottola does a fine job, as the action unfolds, of ensuring that each of the central characters has a moment to shine, though débutant Christopher Mintz-Plasse, who tears through the film delivering every line as though it's his very last, threatens to upstage everyone, especially more subtle performers like Michael Cera. There's also an air of warm nostalgia about the film - which recaptures something of the atmosphere of a high school standout like Dazed and Confused, which also took place over just one evening - despite the very contemporary setting, as if the characters are already looking past the end of high school to something more, while Mottola captures the Los Angeles locations with a surprising, low-key glow more usually reserved for small-town life.

I watched Role Models recently, simply because I wanted to see if McLovin' had any other tricks in his bag. He did, so that was refreshing. Still, I'm sure that he'll always be known as "McLovin'," whether to his detriment or not.

Superbad was definitely entertaining for me (albeit somewhat cringe-inducing at times), and I can't help but find Michael Cera incredibly endearing (he will always be George Michael Bluth to me). My main fault with this movie lies in the unnecessary glorification of gun use and the depiction of the police. Not like cops don't warrant some satire and criticism sometimes, BUT... the scenes with Seth Rogen & Bill Hader seemed entirely too indulgent... not in a good way.

And that's what I have to say about that.
:)

I guess I didn't perceive the cops in quite the same way. I thought it was mostly a satire of a certain kind of cop rather than anything more sinister, and that their quick trigger fingers constituted a major point of that satire, although I can see why it's possible not to find it quite so benign. Mixing comedy and violence and/or gunplay is always a little fraught.