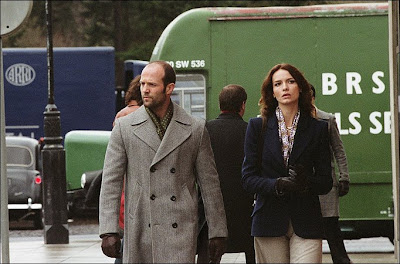 Although it's entertaining enough as a caper, and zips along so briskly that it's essentially impossible to deal with the plot holes as they occur, The Bank Job is disappointing as an evocation of the 1970s, particularly given that Roger Donaldson's previous film, The World's Fastest Indian, captured a certain atmosphere of devil-may-care innocence, specific to that story's setting, rather well.

The production team gets many of the details right (the clothes, the cars, the street signs, even if the blue truck in the image above looks to be the production vehicle for Arri cameras) but there's very little feeling for the specific moment in English life, at the tail end of "Swinging London" and the beginning of a rough 1970s, even though the film's complicated plot grapples with the country's power structure (political and royal) and London's seamier side. The characters are rarely able to transcend quick-drawn caricature, whether it's Jason Statham as an archetypal Cockney wide boy or Peter Bowles as a spy mandarin; indeed, it's mostly in the film's side story, concerning the real-life revolutionary/criminal (perspective is all) Michael X that you get a sense of the real political stakes.