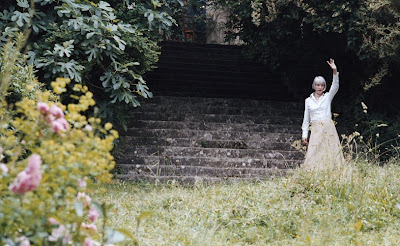 
Funded in part by the Musée d'Orsay, Olivier Assayas's film functions both as a drama of family life and as an allegory for French concerns about the preservation of the country's patrimony. The set-up is a little artificial, given that the two of the three siblings at the heart of the film live at opposite ends of the earth (Shanghai, New York): while this serves the film's dramatic purposes well it nonetheless creates the sense that the family, even by French middle-class standards, is hardly typical. That said, it also allows Assayas, resolutely international in outlook himself, to explore the idea that France's influence spreads in different ways in the modern world - not simply through art but through design and business sense to take two examples.

The film is bookended by two gatherings, the first a final extended get-together at the old summer homestead, with children running between tables while adults open wine, smoke cigarettes, and recall the history of the house, the second a teenage party to give the place one last whirl before it's sold - a sequence very obviously reminiscent of the epic party at the centre of Assayas's 1994 L'Eau Froide/Cold Water. Assayas films both gatherings with a remarkably mobile camera, sweeping through gardens and around corners inside the house, constantly following his characters, whether they're playing or taking a careful inventory of the place (the conversation between the matriarch Hélène (Edith Scob) and her eldest son Frédéric (Charles Berling) prefigures a later visit by museum curators browsing for treasures).

I was struck by critic Adrian Martin's comment on a blog post at Girish Shambu's site that Assayas, among other directors, is "comfortable only with adults and older-teens-who-are-already-adults: the teen part of [Summer Hours] is its weakest, and the little kids are just anonymous bodies who tear around playing indistinctly." It's certainly true that the youngest children are entirely anonymous, but I would be interested to understand how he concludes that the teen sequence is the weakest element of the film: not only did it seem to me full of life, and an appropriate way to celebrate what the house represented, but it also felt like a successful update of the concerns of L'Eau froide, set among a very different generation of teens in the 1970s; these teens feel like our contemporaries, not like those of the earlier film. But it also seemed a somewhat misplaced criticism, for this film's concerns are those of adults, not teens: how to preserve youthful memories long after youth has passed, how to keep families, in the broadest sense, knit together, or how to negotiate the delicate terrain of family finances, concerns that the teenagers at the end of the film can barely conceive of in their lazy, hazy celebration.