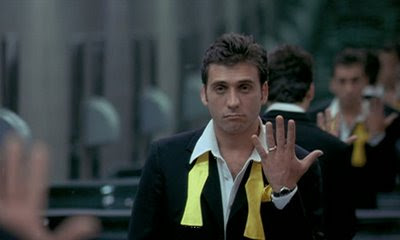 
I'd only seen the Israeli actress Ronit Elkabetz in one previous film, The Band's Visit, but there's no mistaking her voice: her first scene opens with her character, Judith, offscreen, talking to her daughter from down the hall, but she controls the screen even before she emerges. That voice is a crucial part of Judith's arsenal, and it's significant that a later scene renders her literally speechless when her home is invaded by the relatives of her lover Zaza, who want to separate the pair so that Zaza can embark on a respectable marriage.

That communal assault is typical of the film, with extended families demanding conformity to tradition: though the characters are able to contemplate the idea of a life outside the community and its rules, they would really rather avoid such an outcome. There's a barely concealed violence in many of these interactions that contrasts sharply with the tenderness and sincerity of the relationship between Zaza and Judith, whose easy, often humorous interactions are exemplified by an extended sex scene that's remarkable both for its frankness and its warmth.

The film is shot like a series of fixed tableaux, often beautifully composed, lending the film a limpid appearance that contrasts with the often stormy events narrated onscreen. The camera almost never moves, and Kashashvili often holds the shot for an extended period as the actors move around the frame, crowding the edges for the familial discussions.