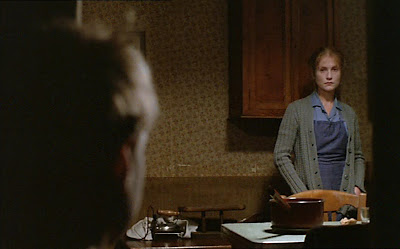 A relatively rare period outing for Chabrol - though coincidentally his first three films with Isabelle Huppert were all set in the past - Une Affaire de femmes confronts issues that were nonetheless very much alive in 1980s France. The country was still coming to terms with the Occupation period (as seen in a film as different as Papy fait de la résistance, which dissected attitudes to the Occupation in comic mode), while abortion, which is at the centre of Une Affaire de femmes, had been legalized only in 1975, less than a generation earlier. 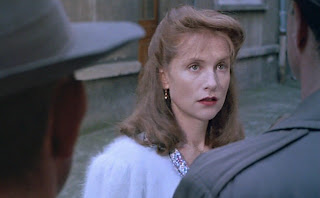 The first hour of the film focuses on re-creating the Occupation as a lived experience. Broader political developments only intrude intermittently (the disappearance of a Jewish friend, a radio address by Pétain) as we get a sense of the realities of privation that dominated daily life. An early scene - according to Chabrol's voice-over analysis of the sequence, it was filmed on the first day of shooting - shows Huppert and her children digging for potatoes, an apparently fun outing for the children that is understood in starkly different terms by the adults. Food, as so often in Chabrol, provides a means of entering the world of the film: those potatoes form the centerpiece of a cramped, taciturn family meal, whereas later, when the family's fortunes take a turn for the better, there's a more expansive repast shot from a less confined perspective. 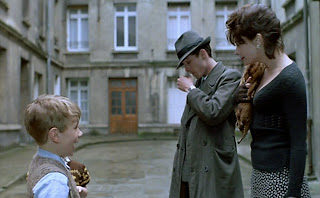 The food in these scenes stands in for the film's real binding force: almost every relationship, even between apparent friends, is conceived in economic terms. Huppert's character, Marie, is quick to see the financial possibilities in her circumscribed town but she's incapable of understanding anyone who does something without monetary motivation - her husband makes cut-out pictures for his own entertainment, an idea that mystifies her. 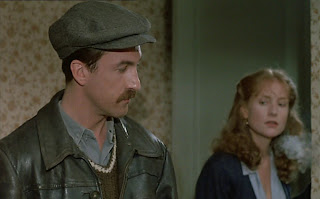 Chabrol implies that almost all of the female characters have the same pragmatic attitude to money, and are unshocked by what seem outrageous commercial proposals. Marie isn't just motivated by survival, though: she still nurtures a dream of a singing career, while her ambitions blind to her own family's non-monetary needs. That's precisely what makes her an interesting character: she's no one-dimensional martyr, so when the film turns about and re-casts as rather more of an innocent abroad - a pathetic request for a postcard of the Eiffel Tower to send to her children - the final scenes are somewhat undermined, although they also try to portray the way in which Marie is a pawn of the hypocritical occupied state (Huppert is almost able to carry the change off; she's adept at finding the extraordinary complexities in Marie's character). The film's final dedication, to the children of the condemned, also seems problematic, given Marie's own attitudes: her son is starved of affection long before his mother is taken away by the authorities for her activities as a clandestine abortionist, spending his days peeping in keyholes in the hopes of understanding what his mother is doing (in shots that recall not just Chabrol's earlier films but also the child's perspective in another wartime film, Rossellini's Rome, Open City).