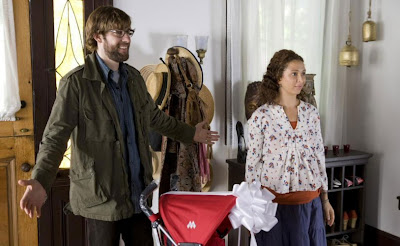 Away We Go often feels like two different movies roughly shoehorned together, the one a string of (often amusing) caricatures, the other a surprisingly nuanced portrait of a young couple facing parenthood. While the juxtaposition works on occasion, at times there's a little too much of a gulf between the main characters, played by John Krasinski and Maya Rudolph, and many of the people they encounter on a peripatetic odyssey across North America (if journeys involving air travel can be termed peripatetic). The central couple are, for all that they worry about being "fuck-ups," two pretty normal people who hold down apparently decent jobs and wonder, not unreasonably, whether they'll do right by their unborn child. But the outlandish, and even clichéd, characters they meet up with only serve to underline their own pretty solid foundations.

To Mendes's credit, he doesn't insist on introducing each location with a series of routine establishing shots; that choice emphasizes that the characters are in search of a sense of place and community rather than just attractive monuments. There's a little more looseness, too, to his filming style on this occasion; as much as a shot that straps a camera to a car in Montreal is a little showy, there's something exhilarating about the moment, too, as if the city has treasures in store for us.