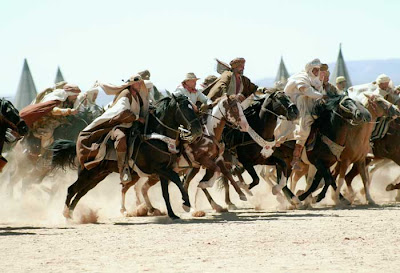 Joe Johnston has carved out what seems a self-consciously old-fashioned niche, making family-friendly films long on entertainment value if not necessarily on profound insight. Ostensibly based on a true story, Hidalgo might have made its real-life inspiration, the fabulist Frank Hopkins, proud, for it tells a rip-roaring tale of exotic adventure - with plenty of the clichés of Hollywood intact, such as the demise of a trusted "native" - without lingering too long on the details that might make the seams show too clearly. This was Viggo Mortensen's first role after the Lord of the Rings films, and while he's moved on to far stronger starring material since, he's well able to hold the screen even with a pretty silly script that denies this rough-and-tumble horseman all but the most chaste of romances.