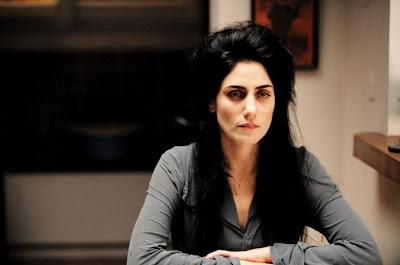 Set in 1979, Shlomi and Ronit Elkabetz's debut film is inspired by their own difficult childhood, during which their parents were constantly at war; the film is set at a time of growing rapprochement between Egypt and Israel, but that period detail only serves to remind the viewer that other conflicts continued to simmer. Apart from the very brief indication of the date, there's almost no reference to the outside world, however, with much of the film taking place in a small apartment where an elderly mother and four children are witnesses to a troubled marriage.

Although there's no doubt that there are other problems in this relationship, the couple's deepest fault line is between religious tradition and secular interests: husband Eliahou (Simon Abkarian) structures his life around weekly services and other obligations, while his wife Viviane (Ronit Elkabetz) chafes against what she perceives as old-fashioned restrictions. As with other Israeli films I've seen, Prendre femme portrays life as an inherently communal experience, with close-knit extended family groups feeling empowered to intervene in personal disputes. This is most strongly emphasized in the exceptional opening scenes, during which Viviane's brothers try to persuade her to take Eliahou back. There's nothing culturally unique about this, of course - there's a striking photo in Elliott Skinner's 1974 book African Urban Life: The Transformation of Ouagadougou which depicts an almost identical situation - but Israeli filmmakers seem to dramatize this experience with some regularity.

What makes Viviane compelling as a character is the fact that she's not depicted as a domestic martyr: while her husband often seems inflexible and certainly doesn't help to defuse certain situations, she's prone to dramatics (giving Ronit Elkabetz ample room to display her formidable acting talents; during these scenes, Viviane's reality seems absolutely convincing), and quick to use her children as a gambit in the back-and-forth with her husband. That, indeed, is one of the film's strongest cards: the faces of the children as they see their parents shred each time after time (the film is set over just three days but you sense that this is an all-too-familiar routine).