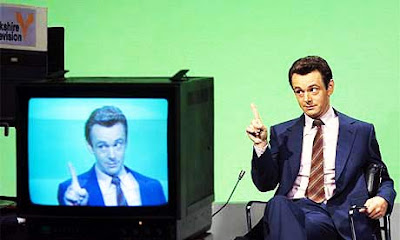 Peter Morgan seems the obvious choice to adapt David Peace's novel about Brian Clough's brief 1974 tenure at the helm of Leeds United for the screen, given that he's produced a string of scripts imagining the backstories of real characters and events. Although the film has the air of reality about it, with statistics from various league seasons appearing on the screen, and individual matches dramatized with reasonable fidelity, Morgan has relatively little interest in the details of the actual chronology. Like all of his scripts, this is about power dynamics - between manager and boardroom, rival managers, or boss and underling (most of all the latter, given the unique real-life relationship between Clough and his longtime assistant Peter Taylor). 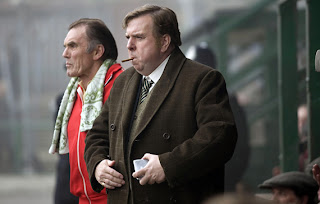 Despite all of the factual manipulations - Clough's stint as manager of Brighton and Hove Albion becomes Taylor's stint at the same club, for dramatic purposes - Morgan and Hooper tap into something essential about the standing of English football in the 1970s, when an Irish player was about as exotic as the imports got (Clough persistently addresses Johnny Giles simply as "Irish"). They've a great sense of the details of football of the period - the crumbling venues, the appalling pitch conditions, the ashtrays and orange segments in the dressing room, Jimmy Hill's chin on Match of the Day - and yet those are ultimately only the backdrop against which a story of ambition almost Shakespearean in contour plays itself out, as Clough tries to extricate himself from the shadow of Don Revie, his legendary predecessor at Leeds, in order to construct the mythology he feels himself to be worthy of.

Hooper's eye for detail extends to the film's visual scheme, starting with the witty title shot, and extending through the use of weather and light as a way into Clough's mind. The sun during a triumphal visit to Spain seems as though it's been turned up an extra notch (just as many a Brit, suffering through the greyest months, probably experienced it at the time), while the northern rain washes away any joy in life and the depths of night in Clough's lonely hotel room are a literal long night of the soul during which the man edges toward at least temporary madness. Morgan and Hooper also do a fine job of conveying Clough's ahead-of-his-time sense of the growing importance of television as a means of setting the agenda, and even now Clough's extraordinary, preening on-camera persona remains virtually unique among managers in the English game.