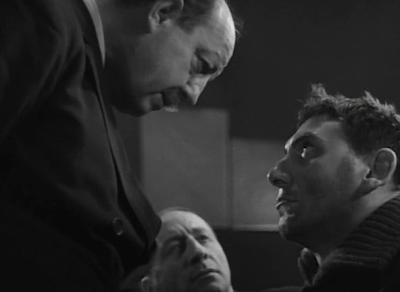 
Quite a shift from his previous film, Poil de Carotte, this is one of the earliest appearances of George Simenon's Maigret character: Jean Renoir and Jean Tarride both filmed Maigret stories the previous year, and those were, as it happens, the only other Maigret films of the 1930s. The film isn't a whodunit - we know more or less from the beginning of the movie who is responsible, and Maigret (played by Harry Baur) quickly sees the lie of the land - but rather a how-can-I-prove-it, which allows for frissons aplenty as we follow the apparently remorseless killer. 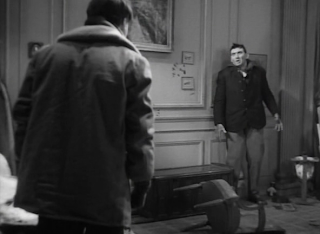 Whereas Poil de Carotte focused particularly on inner lives, Duvivier is more interested here in power relationships and how the different characters interact with one another. He underlines these relationships through the placement of his actors - like above, when prime suspect Heurtin, played by the apparently massive Alexandre Rignault at the very beginning of his film career, shrinks back from the much smaller Radek (Valéry Inkijinoff). Maigret, too, dominates Heurtin, with the inspector quickly realizing that Heurtin's bulk is not matched by his wits. Later in the film, Duvivier shoots Heurtin in a manner that explicitly equates him with Frankenstein's monster as incarnated in the 1930s Universal movies directed by James Whale. There's a brief scene where the "monster" looms over a young girl, swiftly followed by a shot where Heurtin, barely visible at the bottom of the screen, is overpowered by villagers who misunderstand his motives. 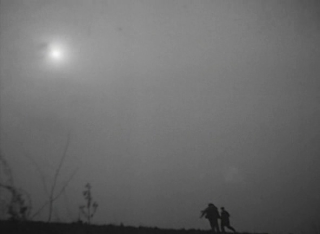 That scene is fascinating, too, for the image it conveys of the area surrounding Paris. It's a desolate landscape, more like something we would associate with the northeast of France, rather than the revivifying impression we often get of the Parisian fringes, such as in Duvivier's own La Belle équipe a few years later. The country scenes have none of the life we find in the cafés of Montmartre throughout the film: there's a similar contrast between suburbs and city in Godard's Bande à part. Duvivier also draws an amusing parallel between the insalubrious place Radek spends most of his time and the break room where the Parisian police gather to smoke, drink, and generally let off steam. 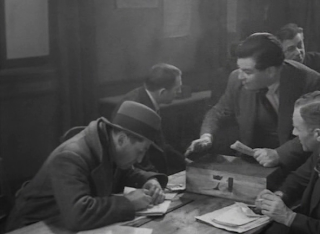 Although the film is generally strong in construction - and there are numerous very striking shots exploiting shadows and space - it does stumble in the relative time accorded to Maigret and his prey. Maigret, as most subsequent adaptations recognised, is a fascinating character, but here we learn relatively little about him apart from gathering that he's a very smart, and rather bulky, man. Instead, we spend much time in the company of Radek, a problematic character: although inherited from the book, he's a rather a stereotypical outsider - he's Czech, although Inkijinoff, who was from Siberia, looks much more obviously "foreign" - intent on corrupting the innocent (in every sense) Frenchman. In addition, Inkijinoff isn't nearly as subtle an actor as his colleagues, so it can be hard to take the character seriously - though the fact that Maigret never under-estimates him helps to restore some balance. 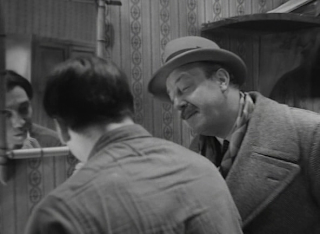