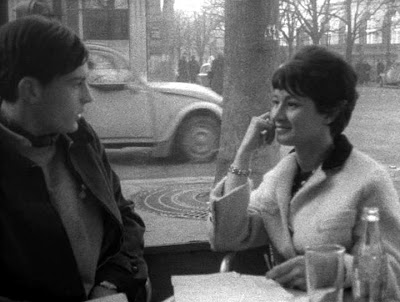 The second of Rohmer's "Six Moral Tales," this film begins in almost exactly the same way as the previous entry, La Boulangère de Monceau, with a careful geographical situating of the action on the Boulevard St Michel. As Rohmer himself acknowledged, the films are variations on a theme, and so it's no surprise to encounter the characters enacting similar scenarios - pursuing one woman "for the time being" while planning the next conquest, or spending the night talking about relationships rather than beginning one (an idea given much more elaboration in the subsequent Ma Nuit chez Maud). What interests Rohmer is the idea of characters learning to become moral beings, with a moral compass, although not everyone will, it seems likely, acquire such a sense of self-awareness. Although the film is occasionally choppy on the technical level - the phone conversations often seem misaligned, and the use of post-recorded sound is often rather distracting even though it was pretty common at the time - Rohmer's compositions are often compelling, particularly in scenes which juxtapose conversations in the foreground with action further back.

(I wonder if the shot of a mask on the wall, a striking image, was consciously or unconsciously picked up by Sembène in La Noire de... although in the latter film the shots of the mask serve a much more fundamental purpose).