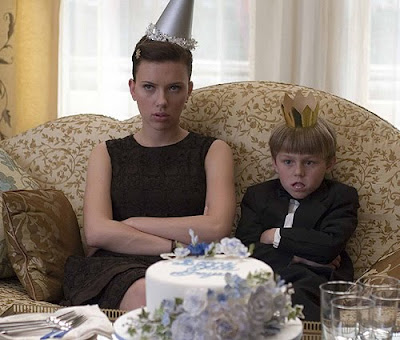 
The presence of American Splendor directors Shari Springer Berman and Robert Pulcini is probably what gives The Nanny Diaries a jolt more interest than I expected, especially in the early going, even if they're forced to comply with genre expectations by the conclusion; indeed, their initial injection of off-kilter material makes the wrap-up seem all the more forced and obligatory.

The film uses the conceit of an anthropological field trip to tell the story of a nanny's summer in an Upper East Side family of excessive wealth and privilege, and the opening scenes with Museum of Natural History-style dioramas skewer the local tribe's behaviour in amusing fashion (perhaps I was more willing to swallow the conceit, too, after a Fall semester of anthropology). As the film progresses, however, the directors are uncertain of the tone to adopt, and where they were able to give a nuanced portrait of the unusual and compelling Harvey Pekar in American Splendor here they resort too easily to simple stereotypes so that Annie's employers rarely ring true; that's especially true of Paul Giamatti's irredeemable Mr. X, although Laura Linney is able to do more with the brittle, sad Mrs. X. However, the swings from romantic comedy to lacerating marital battles are so brusque that we're never certain if we're watching a romantic comedy or a bitter drama.