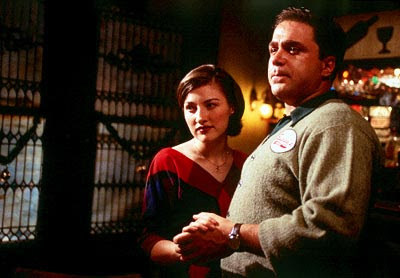 2000, US, directed by Raymond De Felitta


I had never heard of Two Family House until the now-unmasked Self-Styled Siren recommended it as a underrated Christmas movie a few weeks ago, and I was somewhat confused by the seasonal theme when the film opened on a bright summer's day on Staten Island. Although the calendar does eventually move forward, the film never leaves the island, which gives it an unusual and welcome alternative New York feel (the setting felt close to home for me, too, since I live in a mixed Italian-Irish neighbourhood filled with two- and three-family houses -- though our neighbours aren't half as compelling). Equally refreshing is director Raymond De Felitta's refusal to sentimentalise the neighbourhood: while it's a place of friendships and loyalties, it's also the site of bigotry and close-mindedness, and it's Buddy Visalo's fate to navigate between those conflicting impulses.

What's most impressive about the film is the sense that these are real people struggling in very recognisable ways to come to terms with their own beliefs about life and other human beings, beliefs that they may not initially be able to articulate in words but which nonetheless refuse to be ignored. In this complex, changing world - where old and new immigrants collide with each other and with larger social forces - the film defines its own morality, in which adultery may be least of sins, and there's a striking delicacy of touch in the narration of an unconventional relationship between Buddy (Michael Rispoli) and his former neighbour Mary (Kelly Macdonald). De Felitta also makes good use of his camera to underline his characters' inner lives, sweeping around in circles as Buddy sings (while dreaming of a career in showbiz), preceding Buddy out the door of a diner as the world he thought he knew crumbles around him, or capturing the soft-edged memories of an idyllic long-ago afternoon. The ending, too, is entirely in keeping with the spirit of the film, refusing the easy out and succeeding once more in capturing the elusive feel of imperfect real life.

Hmm. I've never heard of it, either. Going to go check Netflix...

Thanks for your comment on my lettering, by the way. :)