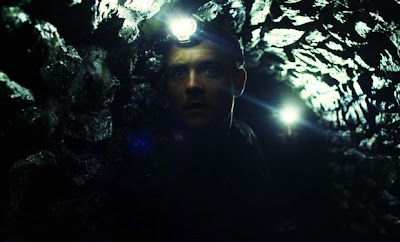 There's no doubt in my mind that Ben Wheatley achieves what he sets out to do here: he's a skilled filmmaker with a terrific degree of control over his material, but ultimately I wasn't quite sure of the point of the exercise, beyond attempting to re-construct a challenging puzzle. It made me wonder if this is how those who don't like Quentin Tarantinto feel, although at least some of those who can't abide Tarantino's worldview -- not a difficult argument to make at times -- don't grant him any filmmaking skill, either, which oversteps the mark. Wheatley's film opens on a jarring note that recalls Chabrol's La Rupture: a frightening eruption of domestic violence, although the scene ultimately plays out in quite different ways.

Still, the Chabrol film isn't a bad reference point: like Kill List, it's a are deeply disconcerting film, which ultimately concludes in bizarrely unexpected territory. The comparison only holds to a certain point,of course; Wheatley emphasizes sound in the creation of atmosphere, constantly keeping the viewer/listener off balance with both the use of sudden intrusions of grating noise and then contrasting that with moments of striking calm. He's also blessed with a number of very fine performances -- as unpleasant as their characters might be, Neil Maskell and Michael Smiley achieve a certain kind of naturalistic charm, at least in their friendship. And while I remain skeptical about the film's overall effect, I must acknowledge that while it was unspooling I was unsettled enough that I briefly became convinced there was a rat running around the cinema; while admittedly this is not entirely beyond the bounds of possibility given the venue I suspect that it was a figment of my imagination-under-the-influence.