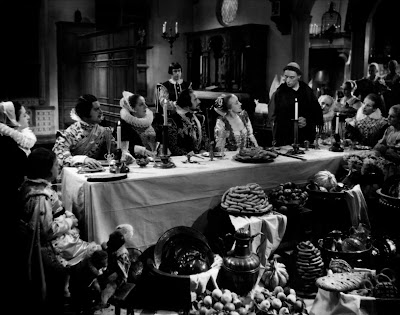 David Cairns wrote about La Kermesse héroïque recently for his "Forgotten" column, and I don't have much to add to his account of the film's extraordinary shifts in tone. It's an odd film that only becomes odder when watched with the knowledge of France's subsequent Occupation, although Feyder and screenwriter Charles Spaak, both Belgian, surely weren't attempting anything along the lines of prophetic commentary on their host country. The film opens on the eve of a carnival that's quickly adapted to welcome the Spanish army, which is passing through the region. The women of the town give themselves over fully to the notion that the carnival marks the overthrow, if only for a night, of bourgeois convention. What's subversive is not so much the idea of sacrifice in the service of long-term good but rather that such sacrifice might be welcome and pleasurable given the restrictions of life in this rather dull town ruled by a rather pathetic collection of men. Indeed, the women's sacrifice might not be that great a sacrifice at all...

Feyder gives us a wonderfully rich portrayal of both the town and the visiting Spaniards, finding time to insert numerous piquant details, such as the soldier and townsman who find themselves exchanging needlework tips. It's very consciously a series of tableaux, with the opening sections and later tavern sequences evoking Breughel's paintings of exuberant village life; Breughel the younger appears in the film as both a painter and a young lover, giving Feyder the opportunity to create a literal tableau vivant as we watch the young artist attempt to wrangle a collection of town busbybodies into place for posterity.

I initially watched the film as an early entry in Louis Jouvet's oeuvre. Jouvet's role is minor, if arresting: he plays a less-than-pure monk, assigned a number of delicious speeches, but it's hardly more than a cameo. Still, it's the first time that he played a character who wasn't drawn from one of his stage roles, and while the stage is never far from his performance style -- particularly the way he rolls words around in his mouth -- his work feels more relaxed, and less bound-up by stage business, than was the case in his previous screen performances.