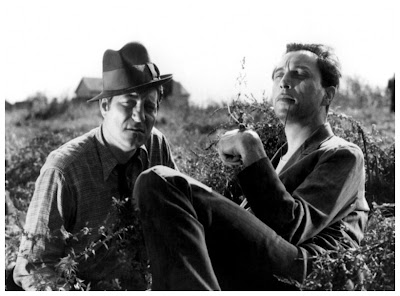 I'm slowly watching my way through Louis Jouvet's filmography, and Renoir's film is the first I've seen that really gives extended rein to Jouvet as a film performer rather than as an actor replaying stage material; I haven't see his performance in Robert Siodmak's Mister Flow, which appears to have been filmed earlier the same year, though it sounds as though it was something of a troubled production [I've since plugged that particular gap]. Here, he's paired with Jean Gabin, who plays more or less the same -- immensely charming -- character from films like the same year's La Belle équipe.

It's an apposite match: despite their differing acting styles, both Gabin and Jouvet were originally men of the stage, albeit the music hall stage in Gabin's case, and there's a joyous complicity to their work together. Both, too, were fairly careful in their choice of work: so many French actors of the period seemed to say yes to every role that came their way it makes Gabin and Jouvet seem cautious by comparison, though each probably had the occasional regret. Their scenes together crackle: they're first brought together in a scene of attempted robbery that foreshadows Blier's Tenue de soirée, in which the putative victims try to get in on the action.

Renoir underlines their complicity with a pair of mirror-image scenes, the first in which Jouvet stands impassively while on the receiving end of a lengthy brush-off by an unseen official, the second with Gabin talking up a storm to a silent police commissioner, again unseen until the soliloquy concludes. The difference between the scenes is key to the characters: Jouvet's Baron ultimately accepts his fall from aristocratic grace, serenely acknowledging an inner truth about himself, while Gabin's hard-scrabble Pepel is always on the make, trying to leave an unwanted life in the lower depths behind. He's almost jealous of his unlikely friend's inner peace, though they do share one treasurable sequence of riverside idyll, where life slows down and the sun and the peacefully flowing Marne come to the fore, washing other cares away for an hour or two.