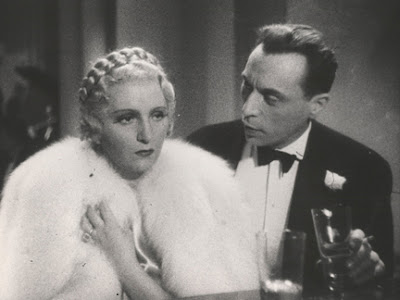 I hadn't realized that Duvivier's film has an episodic structure, so my hopes for scenes in which Louis Jouvet faces off with Harry Baur, Raimu or Fernandel came to naught -- each plays in his own discrete segment, as another of the men featuring on a long-ago dance card wielded by the lovely Françoise Rosay. Jouvet does play in later films with all three actors, so there is that to look forward to; this is ultimately hardly the best showcase for all of the various players, since some of their sequences are very thin indeed. Jouvet, as Jo, a lawyer turned criminal, gets one of the best parts -- the kind of thing that Humphrey Bogart might have played in an American film a couple of years later, layered with world-weary gestures, though there's something very Jouvet-ian about the precise way in which Jo outlines the various articles of the criminal code, which he cites to his partners in crime as a means to ensure the lightest possible sentence in the event of a criminal mishap.

The Baur and Fernandel segments are fairly unmemorable, at least as far as the actors are concerned, though the ecclaesiastical backdrop in the Baur section makes for some interesting set design; Raimu's segment is rather stronger, not least because the sequence is constructed in such a way as to actually give his character some depth. The whole affair threatens to go in an entirely different direction in the startling section featuring Paul Blanchar as a back-street abortionist and tortured addict, wrung out from years in the colonies; the entire segment is shot off kilter, in keeping with Blanchar's state of mind, and it's as though the tale drifted in from an entirely different movie that happened to be shooting on an adjacent, and much grimier, sound stage. The segment is so distinctive that I looked back through the rest of the film to see whether or not Duvivier had used similar, if less obvious, ways of marking the visual signature associated with each entry on the dance card, perhaps like the technical challenges Claude Chabrol assigned himself when shooting his Lavardin films, but I didn't pick up on anything obvious.