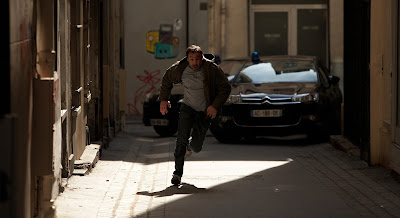 After I watched Nuit blanche, Netflix thought I might fancy À bout portant too -- unsurprising given that they are both pretty relentless actioners, with kidnapping at the core of the action, though this film is rather more fanciful in some of its set-ups, and occasionally recalls some of the delirious construction of a late 1980s John Woo flick, where credibility takes a firm back seat to adrenaline. With the exception of the pregnant-woman-in-peril sequences, which add almost nothing except a vaguely TV vibe, the first hour is very strong, sketching out the consequences for an ordinary man (Gilles Lellouche) caught up in extraordinary crime as well as the unlikely partnership he forges, reasonably credibly, with a criminal (Roschdy Zem) with whom he has crossed paths. Cavayé can't quite keep it all in the air as the movie advances, though -- there are a few too many racing-against-the-clock sequences, while it's sometimes very hard to tell when people are truly in danger given that we have no sense of their proximity to each other (Nuit blanche was much stronger on this score, with shots more carefully structured to show us the relationships between the characters as they progressed through the film's main setting). The end result, disappointingly, is all too neat, much closer to Hollywood on the Seine than the grittier opening might imply.