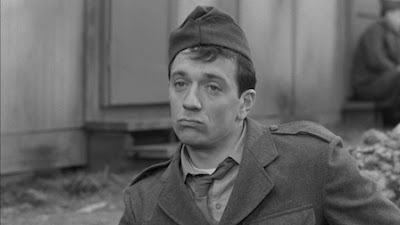 Though it shares affinities with Renoir's own earlier La Grande illusion -- the survival of fellow-feeling in the midst of war, most obviously -- this late entry in the director's filmography feels more in the spirit of other popular hits of the period dealing with the wartime experience, most obviously Henri Verneuil's 1959 La Vache et le prisonnier, one of Fernandel's major successes, and even Gérard Oury's subsequent blockbuster La Grande vadrouille, with Louis de Funès and Bourvil. All three films move, with varying success, between comic and serious registers, as seems to befit the shared wartime setting, though Renoir, as one might expect, manages the transitions pretty seamlessly, particularly in a suspenseful section where prisoners listen for news of an escape. The terrific group of then-largely-unknown actors like Claude Rich, Claude Brasseur and Jean-Pierre Cassel combine to create a wonderful series of portraits of Frenchmen from across the spectrum thrown together by the circumstances of war. The comic Guy Bedos is also amusing in a small role, the opposite of his logorrheic stand-up persona, while Jean Carmet provides a little more experience in one of the most broadly comic roles, a farmer obsessed by the care of his cows, perhaps an explicit nod to Fernandel's character mentioned above.