House by the River 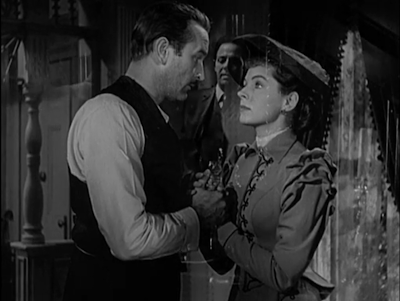 House by the River starts out in what seems like classic Lang/noir territory -- a man making one foolish decision that threatens to unravel his otherwise routine life, but we fairly quickly realize that there's something more sociopathic than fate-battered about this particular protagonist, and the film veers into territory that's altogether creepier than The Woman in the Window or even the far bleaker Scarlet Street. The setting is a bizarre southern-Victorian-suburban mishmash, and Lang apparently wished to render the film considerably more explosive by casting a black actress in a key role as a maid, but had to abandon the idea. Indeed, there's not a single black face anywhere in the film, in even the most thankless of roles, rendering the setting even more unsettlingly strange in cinematic terms. It's terrifically atmospheric stuff, though -- the night-time boat ride in search of a body is masterful, while Lang exploits angles and corridors within the main character's old, dark house to unsettling effect. He's adept at worming an idea into our heads, too: when his protagonist glances at a drain and imagines where the water is coming from -- the maid's bath -- we realize that we, too, have made the same connection, rendering us somehow complicit in the lascivious mental processes of this despicable man.