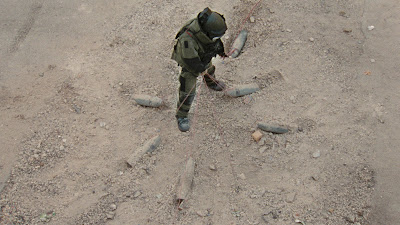 2009, US, directed by Kathryn Bigelow


Although Kathryn Bigelow's filmmaking often attracts attention for her direction of action scenes, The Hurt Locker derives as much of its visceral force from the tension of what might happen as from the action itself. There's an exceptional sense of the reality of each day, the dust, the sweat, the boredom and then the adrenaline of the soldier's life in a combat zone (themes that are also central to the underrated Jarhead, which narrated events in 1991), although the film inevitably glosses over the less dramatic interludes in favour of perfectly paced sequences of bomb disposal or engagement with a sniper.

Despite the emphasis on day-to-day realism, it's a film of almost complete abstraction from current events, without any overt commentary on the actual Iraq war but fascinated by the minutiae of the experience of war in a more general sense (I couldn't find anything in the film to prevent it from being set in Afghanistan or during the first Gulf war, for instance).

The Hurt Locker has some similarities with Claire Denis's film Beau travail, which focused on a group of French Foreign Legion soldiers in Djibouti, again without much context for their presence in that African outpost. As in Beau travail, the details of movement and of the ways in which the men relate to one another through their actions are central to The Hurt Locker, while both films feature men (played by Denis Lavant and Jeremy Renner, respectively) who seem spectacularly ill-suited to life in their home countries - and who, at the same time, aren't fully functional human beings in military life, either.

On the technical level, the parallel with Denis's work seems equally explicit: both filmmakes pay exceptional attention to sound design, with sound - and sometimes the absence of sound - frequently taking the place of dialogue. The ending of the film has a strange symmetry with the beginning of Abderrahmane Sissako's wonderful La Vie sur terre, a film which channels something of the same spirit as Denis's work. In both films, a scene of abundance in a Western supermarket underlines the protagonist's alienation from the place where he lives. With all that in mind, it's hardly surprising that The Hurt Locker wasn't a more financially successful endeavour, for its conventions are more frequently those of the art film than the Hollywood war flick; narrative is relatively unimportant, despite occasional captions that mark the progress of time, with atmosphere much more critical to the film's effect.

I was struck by the use of a handheld camera throughout the film, apparently to denote documentary realism (a pretty common visual shorthand). The handheld camerawork doesn't translate into careless framing (Jim Emerson has a nice post on Bigelow's shot choices), but the placement of the camera sometimes seems to undermine the attempt to convey the impression of being there, since we see things either from an angle that wouldn't work in reality (no documentary cameraperson would stand in a sniper's line of fire) or the camera is already in place before the characters arrive (after a particularly trying day, there's a camera waiting for Jeremy Renner's character, William James, before he walks into a bathroom to rinse away blood). Perhaps the intention is to deliver a form of "enhanced reality," showing us the mud and the blood and the beer from perspectives we wouldn't normally have access to, but at times it seems to belong more to the highly manipulated storytelling of "reality" television.

Thanks for writing this! I noticed the correlation between Beau Travail and The Hurt Locker as well. Nice to see someone else's notes :)