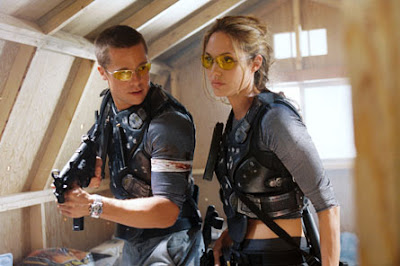 Although the film was conceived before Brangelina infiltrated our supermarket checkout consciousness, it's quick to exploit our offscreen sense of Brad and Angie's charms, with the opening scene asking them uncomfortable questions in the guise of marital therapy - and leaving us with the same image. Given that we are dealing with a couple of professional assassins the film also manages, in it's own extremely strange way, to provide us with a surprisingly clear-eyed portrait of married life and the challenges of keeping a relationship fresh (not unlike the ways in which P.S. I Love You and The Break-Up shed some unexpected light on modern relationships).

Of course, ultimately it's impossible to reconcile those insights with the idea that these people could have any semblance of a normal emotional exchange given the nature of what they do and the callousness with which they do it: as much as the film has fun with the idea that Brad and Angie, or their gun-toting alter egos, might live in the suburbs and drop over for drinks, it can't do much about the fact that in the end we know there's not a whole of overlap between our lives and theirs.

Excellent review about the movie. I totally agree with your opinions and was also disappointed with the movie a bit.