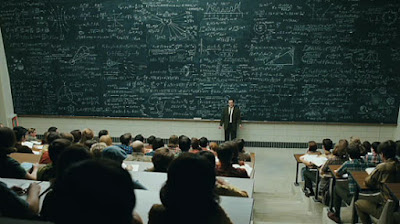 Notwithstanding the setting in a close-knit midwestern Jewish community - not unlike, one is tempted to conclude, the community in which the Coen brothers themselves came of age - the concerns of A Serious Man might prompt nods of recognition from many an African filmmaker, or indeed African viewer. The film dramatises a very fraught balancing act between tradition and modernity, a theme that's at the heart of so many films from Africa, with the eponymous serious man, Larry Gopnik (a great performance from the unfamiliar Michael Stuhlbarg) navigating the alarming shoals of social change in 1960s America.

I'm not suggesting that there's anything conscious in these parallels, simply observing that the film's concerns - exploring ideas about how we conduct ourselves in life, and how we choose to behave when confronted with a concatenation of distressing events - are often those of another form of cinema rather than those of the American mainstream, even though the brothers also manage to have their usual fun with shot choices (looming shots of people in positions of authority), oddball character parts, and elaborately weird dream sequences (at one point Larry asks whether an incident took place the night before, and neither we nor the characters are entirely sure of the answer).

The 1960s is no accident given the way that the decade has come to be seen as a particular moment of change in American society, when a series of long-held values, or at least practices, was called into question. The Coens add to that another, specifically Jewish layer of spiritual questioning, as Larry attempts to reconcile his life experiences with his Judaism, consulting a series of rabbis without ever being entirely convinced of the utility of consulting rabbis. There's a beautiful moment when our expectations are upended as an older rabbi resolves a situation with unexpected grace, revealing his understanding of change more effectively than those who are at least nominally more in touch with youthful concerns.