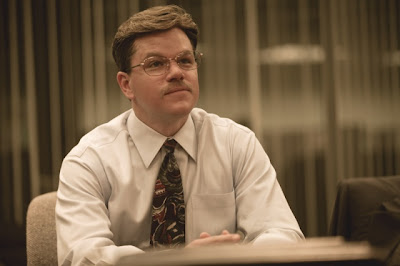 2009, US, directed by Steven Soderbergh

The movie adaptation gives the game away almost immediately, though, using music and a breezy tone to imply that all is not what it seems with Mark Whitacre (Matt Damon), the ADM executive who turns whistleblower. From the opening scene, we're privy to Whitacre's rich interior life, revealing both his Mitty-ish view of his role at ADM and his frequent oddball observations on more or less anything in his path (indeed the exclamation mark signals that the approach is likely to be rather different before the film ever begins).

It's a little jarring, then, that the rest of the characters seem to have been shipped in from a different film. The other ADM executives and the FBI agents who work with Whitacre are played entirely straight (Scott Bakula is particularly good as the main agent, Brian Shepard, who seems like a genuinely good guy on both paper and film) in contrast to the comical image of Whitacre, whose moustache is in keeping with the overall presentation. Within the world of the film, though, no-one seems to perceive this dissonance until it's much too late. Still, the film never presents itself as a detective story, and simply turns the tables: Eichenwald revealed a story which seems utterly absurd in retrospect, and Soderbergh simply presents it in straightforward terms to force us to ask questions of everyone who missed what appear to have been alarm bells of the highest order.

As always in Soderbergh's films, the casting is impeccable, with the smaller roles emphasizing, once again, the extraordinarily deep pool of memorable American character actors (it's nice to see Thomas Wilson, Biff in the Back to the Future series, back on screen, for instance). Just like in Erin Brockovich or Out of Sight, Soderbergh is able to craft a moment in which each actor gets a moment to shine - a skill that presumably also came in useful when constructing films with eleven, twelve, and thirteen thieves.