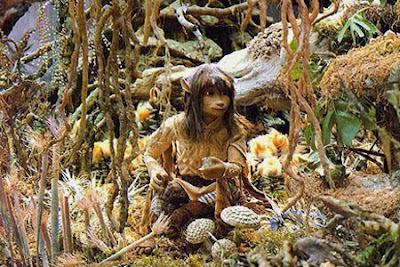 As soon as Avatar colonized screens worldwide, various corners of the Internet sprang to life with speculations and allegations regarding James Cameron's inspirations. From my reading, the main issue seems to have been a lack of appropriate credit, although movies haven't usually been in the business of footnoting their sources and have always, for better or worse, been avid recyclers. Given the amount of Webprint spilled earlier in the year, I'm surprised, then, to find so few comparisons between Avatar and Jim Henson's The Dark Crystal - which, no doubt, has its own lengthy list of inspirations (most obviously The Lord of the Rings books).

Both films feature fairly simple, quasi-mythological narratives set against richly-imagined backdrops, but what continues to make The Dark Crystal dazzling nearly thirty years on is the complexity of the hand-crafted special effects and the extraordinary muppet-style characters. While the central story is quite straightforward, a quest tale in which a young man must prove himself, the backdrops are utterly beguiling, with eye-opening, and often amusing, creative touches. Several of the jungle scenes seem to have reproduced rather faithfully, albeit in digital form, in Avatar, which seemed to only reinforce for me the sense in which each film allows the viewer to become lost in a lush, detailed alternative world for a couple of hours (I know that some people had difficulty moving their gaze around the 3-D Avatar but allowing my eyes to wander throughout the backdrops was one of the film's chief pleasures).