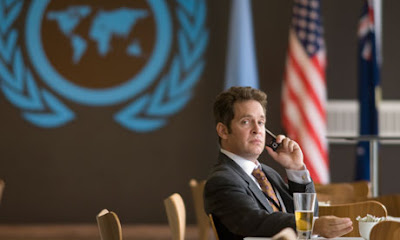 An extension of the BBC political satire series The Thick of It, broadcast between 2005 and 2009, In the Loop is a fine, pointed addition to the faux-documentary genre, presenting the behind-the-scenes events as policy doves and hawks duke it out in Washington and New York with a junior British minister called into play as a key tool (we realize this, but the hapless fellow hasn't a clue what he's gotten himself into).

Although the film never presents itself as an actual documentary, with the usual interviews to camera and so forth, the camerawork and cutting techniques, with brief insert shots of overlapping action, owe much to the documentary style, even if the camera ends up in unexpected locations (the aftermath of a drunken transatlantic fumble, for instance).

Even the poor on-camera behaviour might not seem like a credibility stretch to anyone who has seen the terrific Australian documentary Rats in the Ranks, from 1996, in which the participants in a small-town mayoral race display their cutthroat sides for all to savour. In the Loop, though, has the market sewn up on creative, sustained profanity in the form of a succession of Scottish press handlers, played by Peter Capaldi and, in an especially psychotic turn, Paul Higgins.

The unvarnished cynicism here takes its cue from the process which led up to the US invasion of Iraq in 2003, although Iannucci and his writers also imply that there's a degree of sheer incompetence that acts in concert with the Machiavellian strategizing of various people in government on both sides of the Atlantic. They also have considerable fun dragging their minister back to earth with a constituency dispute involving a dodgy wall - the constituent, perfectly played by Steve Coogan, intervenes at the most inopportunely amusing of moments.