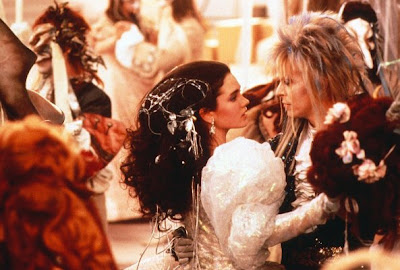 Although it's as technically adventurous as The Dark Crystal, Jim Henson's subsequent film doesn't stand up nearly so well to the test of time, partly because it's impossible to take David Bowie's villain seriously - unless being wildly camp is an unfamiliar form of skulduggery - but more fundamentally because the connective tissue featuring a very young Jennifer Connelly is very dated, with Connelly herself not an especially convincing performer at that stage of her career.

The opening scenes feel as though they are lifted from a 1980s teen film, albeit one without the sharp writing and pacing of the genre's most successful entries; indeed, the sequences underline how much more at ease Henson seems when working with puppet/muppet performers rather than actors. Several of the subsequent scenes featuring Connelly in the eponymous labyrinth feel as though they've been drawn from Sesame Street, with the dialogue infused with that air of earnest explanation so familiar from the television series. Although there are several dazzling sequences - especially the scene that channels M.C. Escher's perspective experiments - the singing interludes too often seem unintentionally comical, while there's almost never a real sense of danger that would give the film some edge.

You sure as hell can't beat David Bowie as a creepy actor!

Labyrinth brings back memories, mostly of that one dwarf peeing on the wall, but memories none the less!