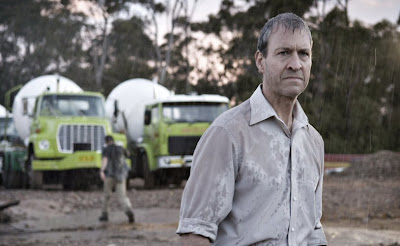 Although Nash Edgerton's debut feature feels a little derivative - the debt to the Coen brothers is clear both in his view of humanity and the noirish subject matter - he makes excellent use of his unusual setting, on the southern fringes of Sydney. The location is exploited to atmospheric effect - overhead shots of a burning house, the road bridge that's a feature of local life, the channel across which a dog repeatedly swims - and Edgerton creates a credible local world of work, criminality and evening outings that makes no reference to the nearby big city.

It's unfortunate, then, that the storyline isn't all that compelling: as soon as the main character, Ray (played by David Roberts, primarily an Australian television actor), makes his first unwise decision you sense that the house of cards is about to collapse, and the characters are generally so unappealing and self-serving that it's hard to invest emotionally in their machinations. There are strong moments, like the scene in which Ray tries desperately to call off a plan he's set in motion, or the blackly humorous sequence in which a dog makes yet another channel swim, which show that Edgerton may have a better film in him if he's armed with a more interesting script.