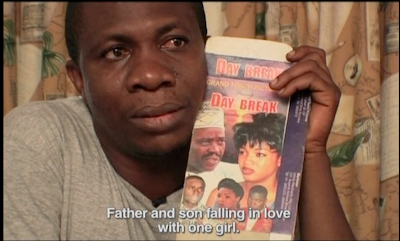 As with Mascarades, I watched Welcome to Nollywood primarily to conceal my complete ignorance from a fellow conference panelist next month. Jamie Meltzer's documentary is an enjoyable entrée into the Nollywood world, focusing on a couple of polar opposites while giving the broad facts and figures for the industry as it stood in 2007. At one pole, there's Chico Ejiro, king of the quickie, who had churned out around 80 films by the time Meltzer caught up with him, and who boasts of being able to shoot a film in as little as weekend. At the other end of the scale there's the extraordinary ambition of Izu Ojukwu, whose artistic ambitions are on an entirely different scale, and whose film Laviva, which is extensively documented here, turns into a kind of Nigerian Apocalypse Now, both for the subject matter -- the chaos of war -- and the massive cost and time overruns. The Laviva story is fascinating, though it does unbalance the film to some degree: while there are a few more ambitious Nollywood directors out there, it's pretty clear that Chico Ejiro is the more representative director -- making films on the fly, getting them quickly to market, and moving on so fast he can't remember the plots of some of his films.