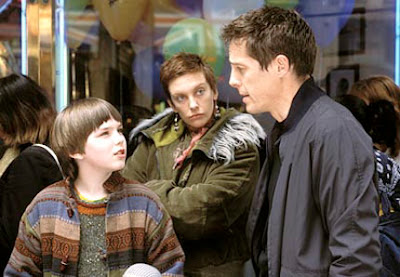 In writing about Groundhog Day, I mentioned the cheap redemptions routinely handed out to characters in Hollywood films, and while About a Boy is set in London, and based on a book by Nick Hornby, it fits the standard American template rather well (no great surprise, with American directors and an American scriptwriter).

In theory there should be nothing to like about Hugh Grant's character, the privileged layabout Will (book and film try to render him less distasteful by providing a comical source for his income since a toff with money would set up a whole different set of associations in Britain). He's smug, terminally self-centered, and almost irritatingly unambitious (though I'm not entirely sure why lack of ambition is a character flaw). And the film somehow hands him the good life on a plate.

There is indeed precious little to like about Will himself - that's sort of the point - but I find Hugh Grant so charming as a performer that he makes the character more than worth persisting with, and Hornby's novel/Peter Hedges's script hands him a terrific array of dry one-liners. There aren't all that many outlets these days for Grant's style of light comedy, and while his comfort zone as an actor is relatively limited he plays this kind of cad to perfection.