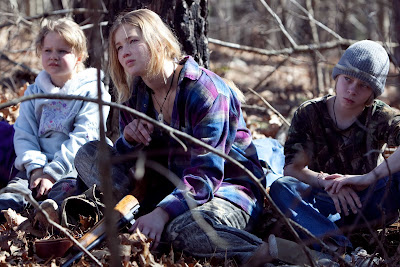 Debra Granik's film features just about every cliché of Appalachia, and yet for the most part manages to turn this into a virtue, creating a strong sense of a place far from the highway and from most of mainstream American life - there's no mention of what's playing on television or of Wal-Mart - rather than a parody of the impoverished backwoods.

There's an extended criminal family (literally everyone seems to be related), folk music evenings like something from a revival of Harlan County, USA, mental illness, ubiquitous drug dealing, children with guns, even a squirrel stew scene, and yet the tone is so resolutely bone dry, without ever a hint of either comedy or disrespect, that there's an almost documentary feel to much of what we're seeing. There's also a terrific sense of rhythm: this is ultimately a quest movie, as single-minded as its lead character (played by Jennifer Lawrence), and at times it has the pacing, and the tension, of a thriller - where the greatest threat seems to come from within the family.