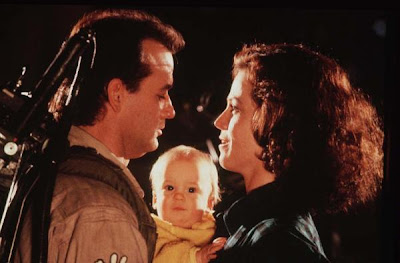 I have no particular affection for the first Ghostbusters, perhaps because I didn't see it until years after the original release, thus eliminating childhood nostalgia, but the sequel has its moments, almost all of them centered on Bill Murray's character, Peter Venkman, an arch-cynic entirely in the mould of Murray's usual onscreen persona. Though Ivan Reitman is no great shakes as a director - much of the film feels remarkably flat, with Reitman resorting to montages set to the film's signature song to give some lift to proceedings - after four films together he knew how to get what he needed from Murray, who is introduced as the host of a dreadful World of the Psychic, a wonderfully tacky cable show. Although he apparently hates the film, Murray disrupts every scene he's in for the better, upsetting the balance with off-colour remarks until the film finally feels the need to force the character to conform.