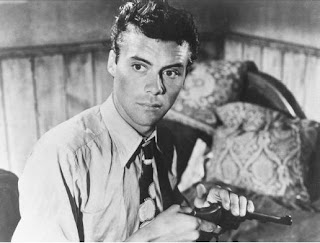 Although it's probably best remembered today as the (unlikely) progenitor of the long-running BBC serial Dixon of Dock Green, which featured the kindly bobby played by Jack Warner all the way to 1976 even though the plot here has him considering retirement, The Blue Lamp was a huge hit in 1950. It didn't do too well with the critics, though, who thought it compared rather unfavourably to American crime pictures, although I can't help thinking that this fails to pay much mind to the differences between the US circa 1950 and Britain in the same year, as well as implying that most American crime films of the period were gritty and hard-boiled (The Window, for instance, intersperses scenes of kindly, oblivious cops that make those of The Blue Lamp seem like relentless bloodhounds).

There's also some terrific location work that gives a vivid sense of several London corners, most obviously the scenes set at the dog track, long since dismantled by the wrecking ball, and it's nice to see someone other than John McCririck demonstrate traditional bookie hand signs. The sequences leading up to the climax recall Ozu's or Mizoguchi's use of desolate urban spaces, undermining the sense of the city as a vibrant, finished place.