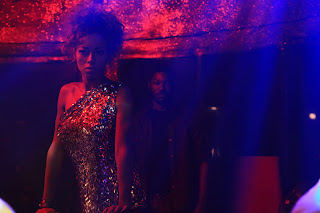 As much as I understand the motivations of the generation of African directors who came of age in the 1960s and 1970s, who consciously worked against Hollywood cinema in particular, it's hard to avoid the impression that there's something approaching a taboo around the idea of fun in the average film from the continent. That is, in some ways, testament to the continued influence of Ousmane Sembène, who took the view that cinema was an important educational tool, though that's not necessarily an unproblematic idea since most colonial administrations took exactly the same view, even if the intended lessons were somewhat different. While there have been notable earlier exceptions, Ça Twiste à Poponguine or Quartier Mozart to name two, the explosion of Nollywood cinema, often wildly, wilfully entertaining even when engaged in social commentary, often makes the festival-circuit filmmakers seem a little staid.

Viva Riva!, then, is the first film I've seen in quite some time to comprehensively overturn preconceptions about African cinema: as one writer commented, it's as though Tony Scott took his camera to Kinshasa and cooked up one of his over-heated extravaganzas on the banks of the Congo. That's true of both the film's strengths - frenetic pacing, a justifiable cynicism about everyone's motivations, wildly colorful characters - and its weaknesses, most obviously its sexual politics, which are a muddle of progressive attitudes and retrograde images, although the sexual frankness is refreshing for African cinema, sometimes notably coy about matters of the flesh. The opening section is perhaps the strongest of all, a brilliant montage that sets up a background of financial penury and criminal energy with no fuss and no dialogue, while also giving us an unfiltered glimpse of African street life without a hint of ethnography. Even if the rest of the film can't quite rise to that level, it's a wild ride capable of pointed commentary: the ending is a rather bleak commentary on the realities of Kinshasa life.